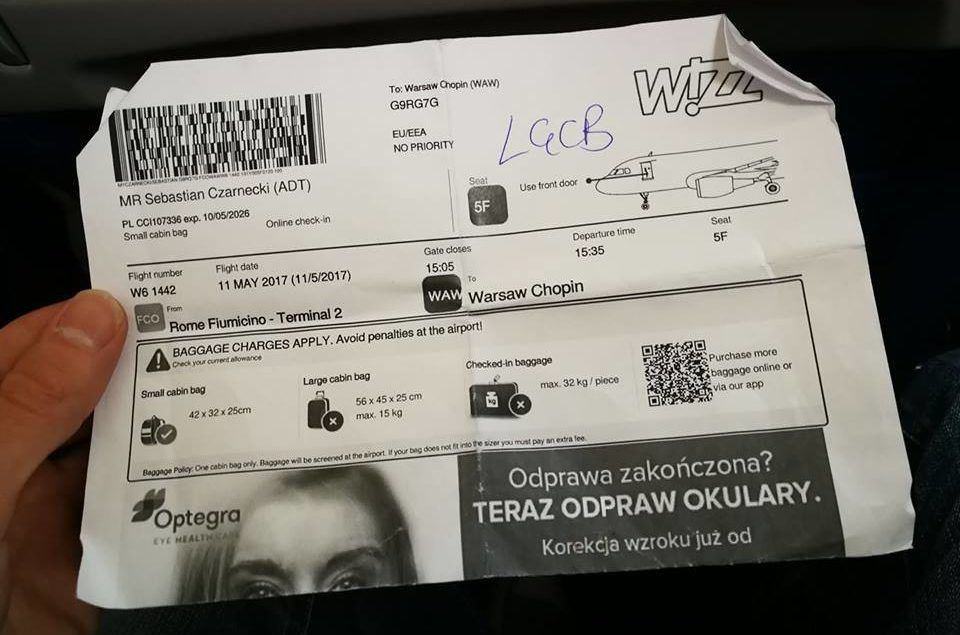 The acceptable dimensions of free luggage in Wizzair airline are 42x32x25cm, which means generally that you are allowed only to have a backpack. I have realised it just before entering the Gate on Okecie airport, squeezing my fairly large suitcase on wheels.

Polish inspectors randomly selected people by checking their luggage. Two ladies in front of me had to pay cash penalty. Me, luckily, with „poker face” turned on on my face managed to get through.

At the airport in Rome, both Wizzair controllers applied for their work and anyone who suited their suitcases at 2 cm did not meet the dimensions of small luggage they were asked to the third additional queue created specially for extra-luggage fee.

The situation seemed doomed to failure.

Just before Wizzair’s lady was supposed to check my ticket and luggage size, I did the last thing I could, that is winging maneuver, breaking through to the other controler. I hoped that the little confusion created would help me get in the plane. Unfortunately, a Wizzair-guy, without using a single muscle on his face, told me that I have to pay 43 euros penalty. Ouch.

I stand last in checkout queue

I took out the card, cursing under my breath that I did not grasp such a thing as the dimensions of the suitcase. The amount displayed on the terminal: 43.00.  Second after it disappeared and the terminal’s display stopped shining. Wizzair-guy asked me again whether I certainly do not have cash. I denied again.

All passengers had already boarded.  The terminal was still plugged into the various types of cables. In front of the gate, I was the only passanger left with the wizzair personel.The guy noticeably sighed, slowly moved his gaze from the terminal to me and spelling every word extremely slowly, he said:

„You are very lucky. The terminal just broke. You can go.”

I looked up, thanked the Universe for intercession, smiled and headed for my seat on the plane.